check out the view 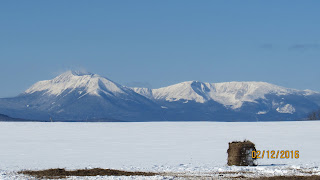 We have some beautiful scenery here. This is Mt Katahdin.
Can you imagine looking at this view from your barn yard?! Or mowing hay and looking out and seeing this?  How gorgeous is that?!
This view is enjoyed by a farmer that we know. We went to see his farm and visit. My husband and I were just in awe of this view. I'm a little jealous of it. But don't think that I'm complaining about my view. I certainly enjoy mine.
There is something about the mountains that are just amazingly beautiful to me.Their rugged outlines and sometimes fierce weather.  Maybe it's because I live where I can see them, and my roots go deep here, in this place, and this land I call home. Maybe it's because I've lived somewhere where I've become spoiled to the beauty that surrounds my home and I am loath to leave it.
I certainly enjoy the beauty that surrounds me. I find that I get caught up in the views I see and the real beauty that I live in and enjoy. I can stop and look out the window or walk out my front door and watch the sun go down. I can get up early in the morning and see the sunrise over the hill behind my house. I love how each day they are different and suck me in to watch as the sky is transformed by the hand of my Creator.  I never tire of it.
Stop and look at the beauty that surrounds you and drink it in!
Have a great day ya'll.
Posted by SweetLand Farm at 12:52 PM 1 comment:

Email ThisBlogThis!Share to TwitterShare to FacebookShare to Pinterest
Labels: winter

Here is Belle. She loves to help with everything. Moving the cows are probably her favorite thing to do. That and eating peanut butter. :) We are working on keeping her from making them run. She gets a little excited and makes them move too fast. But she is learning, as are we in training a dog to herd. She has such a great instinct to herd. I'm amazed. She doesn't back down now in making them move either. She knows she is supposed to get them to go! 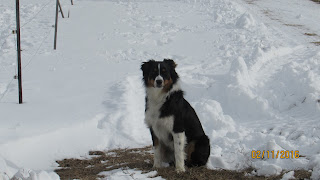 See. We have snow.

Belle is now 10 months old, and filled out nicely. She has a tremendous amount of energy and can run. And I mean run! That dog can  move. She almost becomes flat as she flies across the field to whatever suits her fancy. She can mp too. But I don't want her jumping too much or too high. It's not recommended they do such things until they are one. Due to their hips and the fact they are still growing.
Yup. I love this dog. I'm so proud of her.

whats cookin in my kitchen 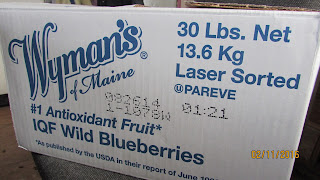 Yup. He loves me! He brought me home some blueberries!! 30 pounds. Frozen and all clean! Mmmm. I see lots of blueberries in our future. I love blueberries. They are my favorite.

Have a great day ya'll!
Posted by SweetLand Farm at 9:10 AM No comments:

Email ThisBlogThis!Share to TwitterShare to FacebookShare to Pinterest
Labels: cooking

I'm still around. My computer died and we had to get another one. Then I get busy with life and forget to blog! Seems like everyday posts would be boring. So I don't tend to do that. Who wants to read the same blog post everyday?! Basically I do the same thing everyday. With exceptions of course! Then there are times when I do everything but the norm. So I'll give you a post about the farm.
But enough about that rattling along.

The other day we turned the heifers out. We decided to put them out alone. We weren't sure what they would do, and we didn't want anyone to get hurt. Well those two little buggers (Goldie and Callie) ran and ran right through the fence. Well that was fun! They decided that the fence was too hot after the second time of thinking they wanted to go through it. They learned their boundaries. They finally decided to settle down and eat some hay. But not before they goofed off in the hay I threw on the ground.
Here are some pictures for your enjoyment! 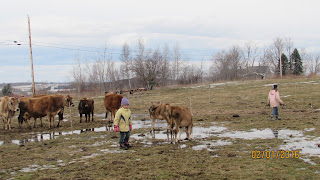 The other cattle are looking on with excitement at the heifers. The two kiddos in the pasture are my youngest two. 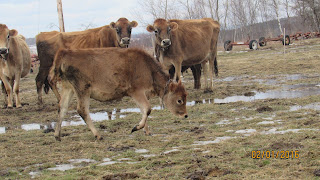 Callie. As you can see we didn't have any snow. Now we have some. Not a lot. But enough. 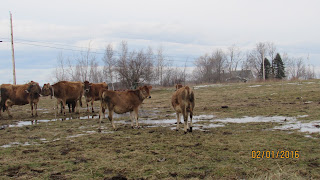 Kicking up their heels a bit!! 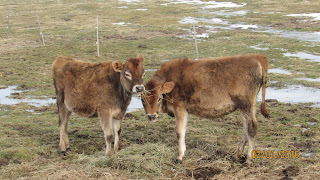 Finally eating some hay after feeling their oats!
Have a great day ya'll!!
Posted by SweetLand Farm at 12:32 PM No comments: