it's a good day to be born

Well we took delivery of a bull calf today!  Dandies second calf, and her second bull calf. Although this time she is so much better off. Last year we almost lost her to Ketosis, and then milk fever. And had to pull the calf. She was due the 22 and we've been on pins and needles waiting for this calf to come. Due to all the hardship she had last year. We've been up every night multiple times checking on her. She's been bagged up and dripping a little milk and her vulva has been swollen for several days.
She labored for about 22 minutes from the time we saw the sack of front hooves come out to the time he was on the ground. We were all outside watching and I got lots of pics. So if your squeamish don't look down at the pics. I think it's an amazing event and the kiddos all watched.

I was actually heading out the drive way to go help my sister at her farm when I looked in the pasture and Dandie was standing with her head down and back arched. That looked suspicious to me and I stopped and watched. She laid down and was clearly starting to push. I ran back to the house and called to  my husband and grabbed the camera. I always grab the camera! He texted my sister to let her know I was not on my way. She understood, she had goats that recently kidded. We all sat and watched the event quietly. Even the animals were quiet while she labored. The other cows left her alone too, they must sense something is different with her and they leave her be.
Graphic birthing pictures! You've been warned!  (Smile) 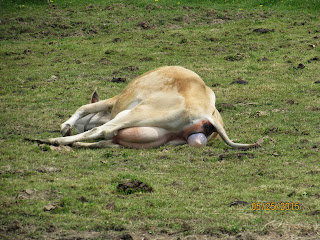 We kept a watch on the time due to the fact that she had such a time of it last year. But this time she was an old pro at it!  She did it all on her own. She was down for a while. Then she was up. 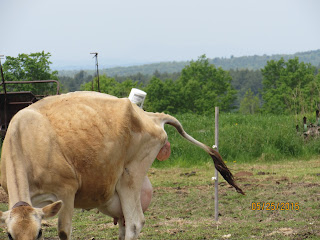 We watched her breathing when she was down. Then she got up and moved around. We just moved too. But we kept our distance to let her work. Then she laid down and just pushed. 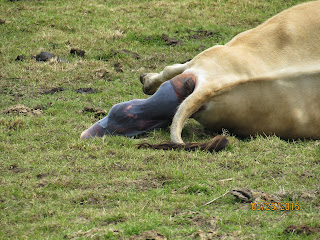 And here he comes out! 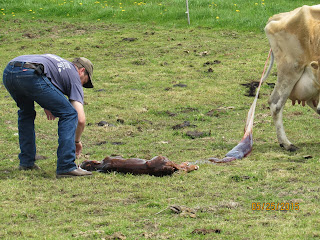 My husband went out in the field to get the sack off it's nose while she stood up and then her backed off to see what she would do. 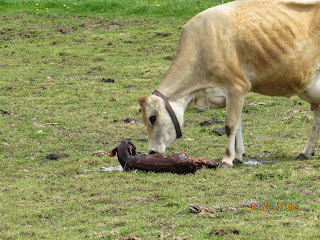 Her natural mothers instinct kicked in and she immediately came to him and licked him dry. All the while mooing softly at him and nudging him to stimulate him. It was amazing to watch her. 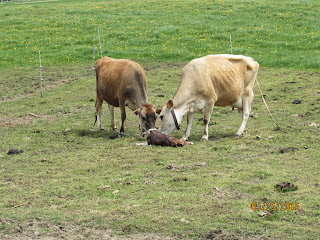 Daffy (who is 7 days over due) was in the pasture with her, and she wanted to come see the new addition. Dandie didn't seem to mind showing off her prize! 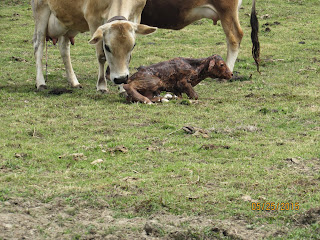 Then started the trying process of standing on those long wobbly legs. 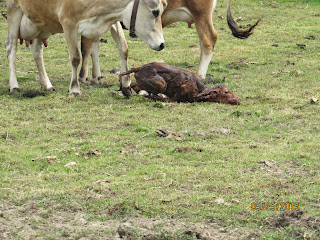 Ker-splat on his face. After some more encouraging from his mama he was up on his feet and noisily eating away! 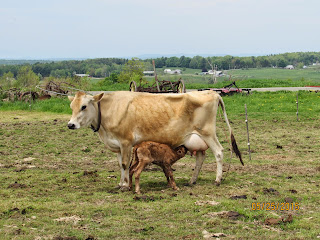 And here they are. Dandie is a wonderful mom and she is good to her baby. So far they are both healthy and happy, napping in the pasture! Now we pray they stay that way! We are pleased and thankful for a healthy calf and mama!
Have a great Memorial Day ya'll.

Well yesterday was Daffodils 2end birthday! And today is her due date for her first calf. We are waiting...things are changing on her body to tell us the time is coming. I just don't think it will be today while it's nice and sunny out. Probably tomorrow when it's cold and raining she'll have it... 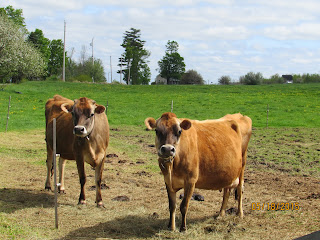 Daffy is the cow in the back of the photo. The one in front her mama, Maggie. 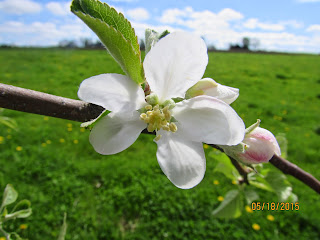 Spring is springing. It's dry here. I'm surprised with all the snow we had all winter long too. But things are blooming. It's been a cold spring too, temperature wise it feels more like April then May. 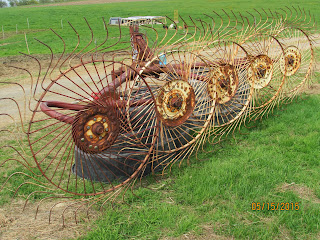 We bought a pin wheel rake this winter. Got all it's teeth it's a little rusted but works fine. Fairly simple piece of equipment, nothing fancy about it. And it's a big step up for us as far as raking goes!
We also got a hay elevator! I'm most excited about that! It's all in working order too. We got it out and put it together and greased it all up. I don't have a pic of it though. Maybe later.

One more piece of equipment we got this winter was a chicken plucker! 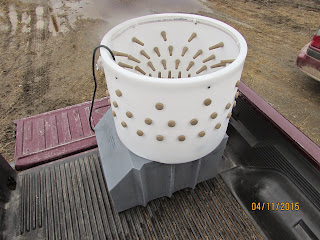 I think this one will defeather 5 chickens at once.  This will save so much time for us! And we have lots of broilers to be doing in a few more weeks! I'll take pics and show you. Aren't you excited?!

Well here is hoping that when I post next it will be birthing pics of Dandie or Daffy!
Have a great day ya'll!

Posted by SweetLand Farm at 1:25 PM No comments:

Hey a'll. Been a while. Soooo

If any of you are interested we have 2 calves coming very soon! Due dates are the 18th and the 22 of this month! We are very excited about this. We are watching them both closely because things are achangin on em! If you catch my drift ;)  I'm hoping real soon! Dandie and Daffy are the ones due. Maggie will be later in the summer. 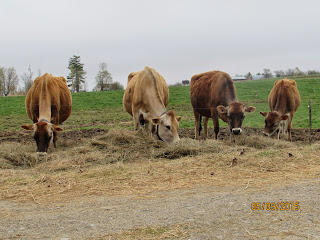 Here is the herd! L-R Maggie (the mamma to all the other cows in the pic) Dandie, Daffy and Suzie. We are very proud and thankful for these girls! I hope to catch some action shots of them delivering their calves too! This will be Dandies second calf and Daffy's first. 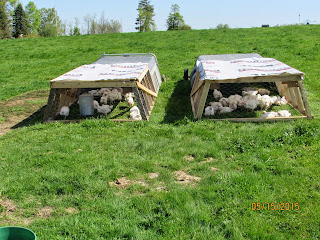 100 are about 4 weeks old. And better yet they are all sold! They are on a GMO FREE grain! These older ones are on pasture and moved everyday. We have about 50 in each pen, so they have plenty of room. My husband made the chicken tractors from old truck cabs. He's amazing :)  They have wheels on the back, the cab part, then we stick a dolly under the front and just push it. The chickens move nicely along to the new spot of grass. 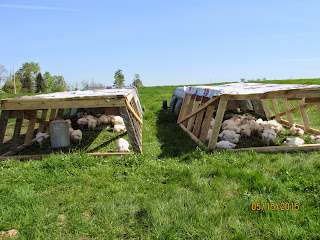 The other 100 are 3 days old and live in a chicken brooder my husband built from an old pop up camper frame. I told you he was amazing! It works very nicely to keep em warm and dry too. 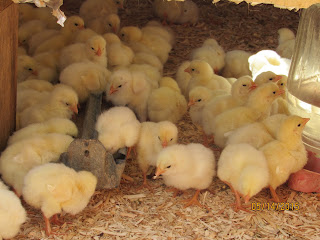 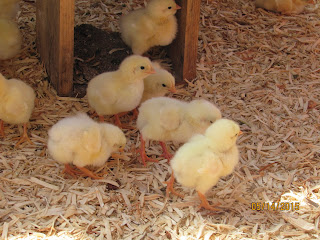 Kinda cute right now hu?! I like how they make themselves comfortable in the feeder. (My oldest daughter took these pics for me). 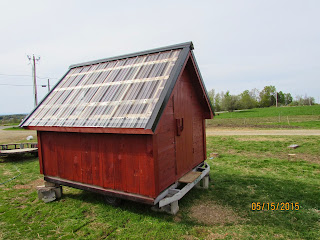 Here is the brooder.  The other side of the roof is regular roofing .This side lets in the sun to warm it during the day, and that cuts down on the amount the heat light works too. We have that on an automatic thermostat that turns it on when the temp cools down. And as they get older we can turn the heat down as needed to get them out on pasture when they are 3 weeks old. He even put some insulation on the inside to help keep it warm too, only about half way up. Don't worry there is some ply wood covering it.  Kinda sweet I think! Makes having them a lot easier and more efficient. And we all know that on a farm we like to be efficient with everything we do. Or at least we do!
Well that is all the updates for today. I gotta go finish making supper for the hungry brood that is coming, and it's almost time for evening chores here in New England!!